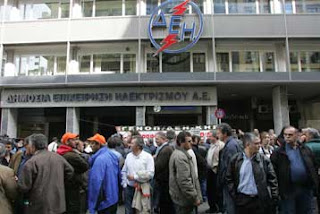 Garbage men and municipalities' employees continue with their strike up to Wednesday.
GSEE, ADEDY, courthouse employees and OTE telecommunications trade unions call for a strike on 19/3.

On Wednesday trade unions of workers at Metro and Electric Railroad abstain from work for 3 hours and call for a 24hour strike on Thursday.

Wednesday and Thursday, engineers and lawyers go on a strike too.

Meanwhile, there have been some serious problems at the ATM cash supply due to the bank employees strike, against the pension system degradation. Bank employees will continue their strike through the whole week covered by their trade union (OTOE).

Also, around 4,2 million euros costed to the stockmarket the bank employees strike.

12/3: More than 6.000 strikers demonstrate in the center of Athens. During their march, they unload garbage from dust-carts and throw them to the policemen guarding the ministry of employment. The cops' union sues them. 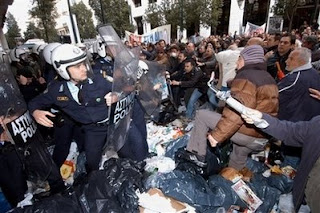 Photos from the march at: http://athens.indymedia.org/front.php3?lang=el&article_id=840411

In Athens, clashes erupted when riot policemen took over the Ano Liosia (Athens) disposal center, to let strike-breakers in. Hundreds of strikers, who had their syndicate's meeting at the time, went to the dump and stopped the dust-carts from entering.

Meanwhile, according to a jury, any similar future mobilization under the same demands is from now on illegal.