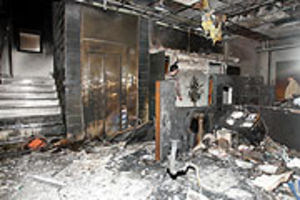 The following communique was sent to directactiongr@yahoo.gr, and is referring to a three day rampage against among other targets, a Millenium Bank in Pagrati, a security vehicle in Koukaki and a construction company's vehicle in Kifissia, an Emporiki bank subsidiary in Agia Paraskevi, an electric company in Agioi Anargiroi and another security car in Petralona, as well as a security company offices in Galatsi (all of them in Athens, according to http://www.skai.gr/master_story.php?id=76442). The communique:

The conspiracy of cells of fire Thessaloniki-Athens claims responsibility for the three-day (18-19-20/3) arson attacks. The police state constitutes an irrefutable reality. Mobilizing the dogma of security (insecurity) it intensifies its repressive action, penetrating every level of the social tissue and tearing it into pieces. Panoptism is utilized in every expression of the older and the new forms of surveillance and the industry of fear is set for good. Cameras, cops, juries, municipal cops and security patrols safeguard this new complex net of captivity.

In every street corner, snitches in uniforms or without, lawful avengers and police informers give an Orwellian perspective to life, ready to prevent and choke even the tiniest delinquent practice or thought. The punishment of the prison either comes to seclude the delinquent behaviors born in this society or hangs above whoever practically questions and attacks the empire's imperatives.

The target is to create a new type of human-robot having incorporated the vertical relation of authority's surveillance and reproducing it both vertically and horizontally on those around him. The regular circulation of profit and economy, the total entrance of this compromised person in the production-consumption process is a fact in this heaven on earth. Authority seems to have no face, being everywhere with an almost divine nature. Unreachable even when the grotesque mask of the ridiculous, the contemptible, the submissive, appear behind its democracy.

Though, exactly because it does have a face, and it is not unreachable at all, we selected to attack these specific targets:

Tuesday 18/3: Arson against a police bus at Egaleo (Athens).
Wednesday 19/3: Double attack against the city-hall of Thessaloniki, on Venizelou Street and a Security vehicle on Martiou Street.
Thursday 20/3: Series of arson attacks against security companies -that constitute the mercenary servants who spy, intervene, snitch to, and assist the cops-, banks, prison construction companies and electronic security system companies, that undertake the building and the surveillance of human-depositories, the worst form of taking away one's freedom and dignity, in exchange of money.

This 3 day festival of fire is dedicated to the comrades Chrissostomos Kontorevithakis and Marios Tsourapas, detained for attempting to blow up a municipal police vehicle at Paleo Faliro, and facing a jury on July.

Conspiracy of Cells of Fire Thessaloniki-Athens