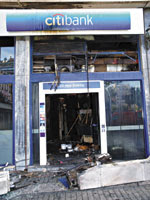 The "Conspiracy of Cells of Fire Thessaloniki-Athens" claimed responsibility for a series of arson attacks in Athens.

On Wednesday 5:20 in the afternoon, the first gas canister device exploded at former minister of justice, Papaligouras office. An unknown person phone called a TV station claiming the arson was in solidarity to the antiauthoritarian Giorgos Voutsis-Vogiatzis, in pre-trial imprisonment since the armed bank robbery at Gizi, and promised the attacks will continue.

The same night, from 2:00 to 2:10, in diverse areas in Athens 8 banks were set on fire, 4 luxurious cars and one insurance company. In particularly, Proton bank in central Athens, City Bank in Petroupoli, Millennium Bank in Gerakas, Millennium Bank in central Athens, City Bank in Pireaus, Open 24 (Eurobank) in Pireaus, Eurobank in Syggrou, Eurobank in Kallithea, Cyprus Bank in Patissia, and Ethniki Bank in Vyronas were set on fire. Also a Cyprus Bank vehicle in Argyroupolis, a sanitary department car in Glyfada, another car the press does n't clarify, and a Security group owned Mercedes in Kolonos, as well as the offices of Ethniki Insurance company in Kato Halandri.

"The economic dictatorship establishes itself everyday on, either on the caterpillar tractors of the tanks, in order to complete the pillage (Serbia, Iraq, Afghanistan), either on the conformism and obeisance of a compromised society that accepts with resignation the terms of captivity and reproduces them.

In these conditions, work is the welfare of economy being the machine's act of war in times of peace. The coercive 8hour work ties up all our time, our possibilities, our mood, our whole existence in exchange for the everyday commands of our bosses and a compensation payment.

This is why we consciously are in the opposite side. We don't beg for social concessions, nor are we interested in the syndicalists' argle-bargle on the pension system. We negate to our thankful exploration. We negate to negotiate for the matter-of-course of irrationality, because work may not be something to be ashamed of but it is something you are obliged to. Every day the same landscape, tired faces, eyes dejected, anxious time and our dignity checking its time-card in the bosses clock.

That's why we arm the old ways and invent new ones in order to escape the captivity of work. We propose a total attack against the existence and the morality of work. Looting of commodities and money from the temples of consumption and profit, torching economic targets, sabotaging the normal circulation of production, self-organised workplace ruptures and attacks...

Thats why we stand in solidarity to the revolutionary decision of the comrade Giorgos Voutsis-Vogiatzis who is kept detained for the armed robbery in ETE bank in Gizi, denying to accept the handcuffs of the constraint of work. As a minimum sign of disordering the smooth functioning of the economic dictatorship, we attacked last night banks, government targets and private insurance companies, and we also claim responsibility for the attack against the political office of the former justice minister Anastassis Papaligouras in Kolonaki. We also claim responsibility for last Wednesday attack at an Emporiki bank subsidiary on 124 Botsari street in Thessaloniki and the attack on Monday in the subsidiary of employment ministry on Antigonidon street, central Thessaloniki.

We do not forget any imprisoned comrade. We 'll be back soon...

Conspiracy of cells of fire Thessaloniki-Athens"