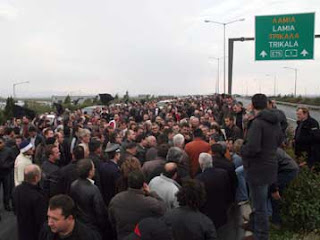 From some reports from the mass-media (in.gr):
The national motorway (autobahn) was blockaded this noon on Tembi, by farmers from Thessalia and northern Fthiotida, with their private cars and machinery but not with tractors, after a call by the Panthessalic coordinatory committee of farmers, after the minister of agricultural development Alexandros Kontos denied to meet with them, on their economic demands.