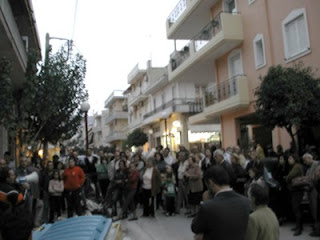 Around 6:30 in the afternoon about 100 residents of Dafni area including some representatives of social institutions, gathered outside the Arkadiou Str. Building where the cell-phone antenna was placed. After discussing for a while about the antennas, some of them cut down the power supply and some 15 residents went up to the building's roof and destroyed the antenna. A march of 100 residents followed the action. Open air sabotages of cell-phone antennas have caused more than 5 other antennas destroyed after the residents' open discussions and actions.

How-to bring down an antenna