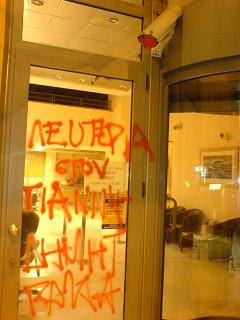 From an e-mail and http://athens.indymedia.org/front.php3?lang=el&article_id=833320

During a march in solidarity to Vaggelis Botzatzis and the 3 fugitives under the same case, surveillance cameras and bank ATMs were covered with spray-paint, and temporarily put out of order. Around 700 persons participated, after a call by squats and collectives of the city, and marched through main avenues (Egnatia, Tsimiski etc). In their return they met with a march organised by paok football fans against the detaintion of a fan under the "athletics terror-law", where they chanted in common prisoner solidarity and anti-repression slogans.