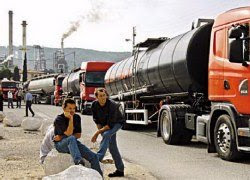 The fuel truck drivers went on a strike from Wednesday, while the truck owners start their strike on Friday. Their common demand is to cancel immediately the appeal to the European Commitee, by the greek Congress of Oil Trade Companies, that asks for the liberation of the licences of fuel trucks and the raises in fuel transport fare. On Monday turist bus drivers from Attika (Athens) will be on a strike too, while circular strikes untill Friday will be realised by the turist bus drivers around Greece. For the time, hundreds of trucks are parked on three points of the national road outside Athens, at Dafni, Metamorfosi and Markopoulo. In the same time, the Congress of Industrialists of Northern Greece asked from the strikers to stop their mobilizations and participate in a dialogue with the ministry of transportations, claiming their members enterprisis that are already damaged by the long term mobilizations of the dock workers in Thessaloniki, will now face even bankrupcy.

On the Olympic Airways now, the pilots of the propeller-planes go on with their strike asking for the rearrangement of the collective labour agreement, denying to work overtime and do mixed routes. The company had to recompense the passenders so it paid near 100.000 euros only on Friday. In the mean time, a large number of pilots is estimated not being officialy on a strike, but not attending work, calling in sick, and also technicians this couple of days reported more than 250% more damages, preventing planes from flying.

The minister of transportations, Kostis Hatzidakis, stated that "we are discussing with the workers, but the government is not willing to give in to blackmail"