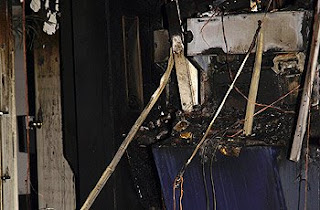 "Greek police say suspected anarchist arsonists have firebombed a tax office in central Athens and caused extensive damage but no injuries.
Police say a group of 30 youths threw petrol bombs at the building and set it on fire."

This is a translation of the claim, published in "Eleftherotipia" newspaper on 12/5/2008:

"The wise committe for destruction and freedom claims responsibility for the attack against the 4th tax office at Exarchia. In an era when the state and capitalists sharpen their rapacious offensive against society more audacious than ever, when costliness gets off the ground, when this monstrous pension system reform is passed, Greece is the state with the lowest salaries and old-age pensions. Thousands of confiscations are realised every day from the lawful robbers and money lenders called banks and tax offices, while in the same time people like Garganas-Alogoskoufis-Karamanlis and the those of the industrialists lobby can smile nastily and ironically blaming the increases in salaries for the economy's mess. At the time of tax assessment a.k.a. the lawful robbery of people from the statists, we selected to hit the tax office, in a way to leave only ashes behind us."

According to another report, the same day, another group firebombed the ATMs in front of Macedonia University, Thessaloniki.