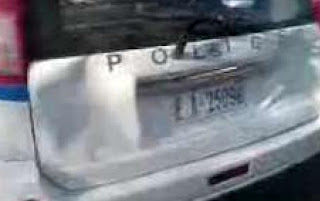 ..."It all begun around 9:30 in the morning, when police officer stopped for a control a 4x4 car at Ori, with two young men inside... During the control, the driver managed to escape, while the other passenger (23 years old) was arrested, accused for lots of violations, with fines that overcome 3.000 euros. The young man's father with 4 fellow villagers of his, went to the police station to ask the reason for his son being under arrest, demanding his release. "He also expressed his disgust for the constant police controls that fine with many euros for various violations the locals". Finally, the cops decided to release the 23 year old man, though taking into custody his father, accused for "insulting" the law officers. Once this was known, relatives and friends of his gathered outside the police station demanding his release, while some of them throw stones at the police station, threatening the cops, that "didn't even dare to come outside". The people gathered tried twice to invade the police station, when the cops repelled them with tear gas and bang-light grenades, thus many local villagers arrived (more than 200 persons) attacking the police station, and even cutting the breaks from undercover police motorbikes and damaging patrol cars parked nearby. The police station was blockaded for hours, and finally broke after the local attorney, mayor and other officials intervened. The father of the 23 year old is still accused for "insult" and "consciously causing damages".