Occupations at the Lawyers' Association and the "Friends of the Police Club" (Athens, 13/12/2007) 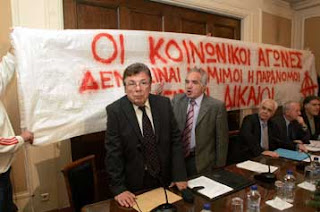 The text read and distributed during the Lawyers' Association Occupation expressing their solidarity to all dissobedient prisoners that participated in the May 2007 prison mutinies, and are subdued to disciplinary charges, as well as the prisoners for alledgedly participating in the revolutionary organisation "November 17" and also anarchists as Vaggelis Botzatzis, Giannis Dimitrakis, Giorgos Voutsis-Vogiatzis, Marios Tsourapas, Chrissostomos Kontorevithakis and Christina Tonidou, can be found in greek at: http://kratoumenoi.ath.cx/node/51. During an event held by the Association, where the minister of justice was supposed to give a speach (he finally didn't come up at all), a group of about 50 anarchists took over the association offices for more than two hours, they hung banners and chanted slogans as "Social struggles are neither legal nor illegal, they are just". They finally left the offices without any police intervention.

In the same time, there was another militant occupation at the "Friends of the Police" club in Peristri district, western Athens. There, the president of the club Giannis Mathioudakis, put out his personal gun and fired a few times against the people, and even "arrested" a 22 year old, who is going to face a jury on Dec. 27th.

hello, i emailed you but got an error. anyway here's the reg cleaner i uses, this shit is good, don't stay without protection!