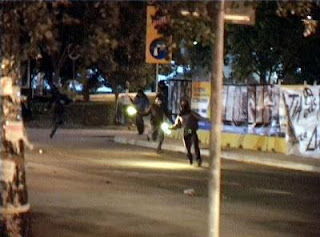 
After Saturday 09/09/2007 midnight about 30-40 youths wearing hoods and helmets, some of them carrying a banner were a slogan against elections and forest arsons appeared signed with an "A" circled, attacked squads of riot-police and undercover policemen that moved inside the universities area. The youths repelled the police using molotov cocktails, fireworks, stones and sticks, while the police threw tear gas and CS gas and some flash grenades. The clashes were on for more than three hours. About three undercover policemen were injured (one of them taken to a hospital) and one of their cars broken down, when trying to arrest some youths. They finally arrested one 19 years old girl outside the Aristotle University library.

Note 1: It is accustomed that city youths every year "welcome" the country's prime minister with riots against the "Helexpo" (a national scale event on comodities' exposition). This year though, police had taken over all roads around the university and helexpo area so as to prevent any riots at this area. Furthermore, squads of 6-8 undercover policemen moved inside the university area for the last two days. They arrested in advance more than 20 "suspicious" persons.

Note 3: Marches programmed for the day were either cancelled from fear of any "provocation", or did n't manage or dared to move to the area the police had taken over.