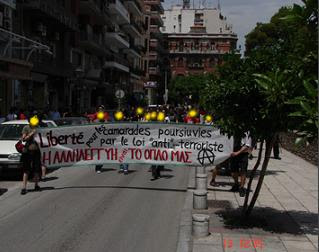 Here is a translation of the e-mail message:

On Friday 13/6 a symbolic blockade was realised in front of the french consulate at Thessaloniki as a minimum sign of solidarity to the french comrades that face state repression and experience immediately the pan-european attempt to terrorize the radical struggles and practices. Following is the text distributed during the intervention.

On January 19, near the immigrant detaintion centre of Vincennes were a demonstration of solidarity to the insurrection of the detained immigrants without papers, was about to be realised, three persons were arrested. The cops found on them materials for the construction of improvised smoke-bombs (a pretty common practice at demonstrations outside prisons in France). They are accused among other things for criminal group composition and constructing of nail-bomb. The two of them are imprisoned and the other one is under juridical surveillance (a special form of "freedom" under a peculiar tight and almost constat surveillance). Another arrest after one week, of two persons near Vierzon, having in their car similar materials and also the already published plans of a juvenile prison under construction, will intensify the terror-hysteria. What follows is extensive raids against the antiauthoritarian milieu, aiding the cops and judges to build up a profile of dangerous terrorists, this inner enemy that rised from the social struggles in France during the last years (the suburban insurrection of November 2005, the pupils-students mobilizations against cpe of spring 2006, the often uncontrollable strikers mobilization, the riots against Sarcozy election of 2007 etc).

The bourgeois press supporting the security state, attacks faces, milieus, "tensions" even specific books. House raids, prosecutions and forced abstraction of genetic material, are some of the sample of this repression that wishes to chart those that find themselves in this milieu. Ivan, Bruno and Damien arrested on January 19, 2008 on their way to the demonstration against the detaintion centre at Vincennes, denied during their arrest to give fingerprint and DNA samples. The two of them got a pre-trial imprisonment, while tho other is under limitative clause. The Vierzon two are in prison under the same special conditions: the antiterrorist law. The cops are accusing them of intending to attack the EPM type prison and one of them of arson attempt against a police vehicle.

Today, all five are accused for "possessing and transporting incendiary or explosive substances", and being a "criminal association with terrorist action". Four of them are imprisoned for four months already. For two of them this pre-trial imprisonment will continue for four more months, while one will be in prison for one more year, after a verdict of the special antiterrorist judge.

Apparently, they way all five of them are treated is very specific. The State criminalizes insurrection and attempts to strangle every non-controlled opposition. The ideas and the way people struggles is targeted, when they move beyond parties, trade unions or other organizations. The State, opposed with this rage, wich it cannot manage nor exploit, invents and then isolates its inner enemy. Police files and security build up certain "profiles". The character used in these specific cases, is the one of the "anarchist-autonomist". Authority describes this type as a terrorist, constructing a threat, in order to gain social consent, to enforce its control and justify repression.

For all these reasons, Bruno, Ivan and the Vierzon two are found today in prison. It is the solution selected by the State, to manage illegal activity, the "dangerous social layers". It now needs to get more people and for more time in prison. Control, increasingly effective, and the fear of punishment, safeguard for those that have the power or profit from a society where all keep in mind they cannot exceed certain limits that limitate and supress them.

For all these reasons and as a minimum sign of affinity and solidarity to the comrades in France, we blockade today the french consulate. The struggle against every form of authority continues.

[Note: for more info on the case, see also: http://cettesemaine.free.fr/]