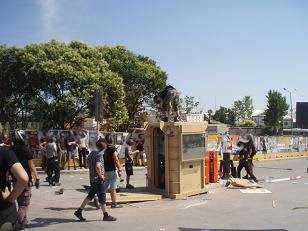 Translation from a report at http://athens.indymedia.org by "Eye witness". Click on the link also for a collection of photos from the action. During the action a bank's ATM was also damaged, and groups of undercover policemen approaching were repelled.

"Around 40 persons without hoods, told the guards to leave and started dismantling the guard tolls, beginning with the bulletproof one. It was indeed durable, making one wander how much money did the dean approved for this thing, but with the support of grindstone (powered by a generator), sledge hammers and other tools, it was totally destructed. Continuously, all entrances/exits of the Aristotle university were given "free pass", as they were kept closen by undercover policemen and security guards, and you need to apply for a special sticker to be able to pass.

The flyers left behind wrote "free pass for all" and "the university is not the dean's property" signed "Initiative of students and non-students for the expansion of free spaces".

3-4 persons fron the crows had their faces covered and only because at the time they were using some tools to dismantle the guard boxes and the control bars. To have a clue of the mood of the action, the youth were not in a rush, they were talking to the people that approached to see what's going on and neither cops approached the area, nor there were any violent incidents, nor hooded people, as the police controled media reported". 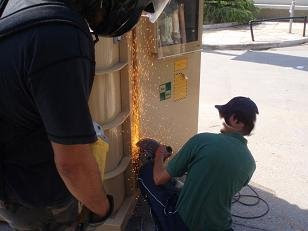 The following is a translation of a text distributed during the actio, also found at http://athens.indymedia.org

From all those things they tailor to their measures...

Every day that passes, in more and more fields, dominance attacks supported by the individualization and the generalized apathy, gaining ground forcing its own terms and ideologies. The university couldn't possibly evade this context, being an important mechanism of the dominance consolidation and reproduction, but also, for good or for bad, one of the remaining milieus of radicalization.

Simultaneusly and inseperately with the "reformation" attempts (towards greater privatization and intensification) promoted in education, there are as well in the university area (as far as this is concerned) smaller changes, maybe less obvious and advertised but as well stranglehold, without a doubt. Fulfilling even more the form and function of the university as it is: an estate of institutionalized knowledge, expression of the productivist (and not only repressive) disciplinary authority, of production of separations and finally extraction of specialized obedient citizens, able to respond to the biorythms of the bosses' productive process.

The unsolicited placement of the subway works with their hidden economic interests and the obvious effects on the city and the university, the terrorism of the unprecedent and provocative surrounding of the university (too) from countless forces of the republic's occupation army and the occupation of its internal area by every kind of cops and snitches during the helexpo events, the constant locking of central entrances, the placement of control bars and guards (we are very suspicious on their role), the attempt to rebuilt the polytechnic atrium, the politics of cleanλiness and gray walls on every hall and many more offensice movements that we all experience every day, form conditions or rather one condition of exemption that has become the rule. A regulatory context of behaviour and action or not at all, pre-made and ready for appropriation. A regulatory context that sure reminds us the role of the university and reflects the dominant relations of the rest of society, reproducing the ideologies of in-security and progress.

This situation is clearly here to stay (furthermore, the recent placement of the new souper-bullet-proof-guard-toll and the outer bars leaves no doubt about that). But neither do we intend to remain inactive. Thus, we select to question their plans in action. Openly and in public, through collective, non-hierarchical procedures. Without claiming any state or bureaucratic legalization, without expecting any metaphysical "students movement" and its so-called leaders to act. Because we are sick and tired of having our lives reduced in a limitated and under surveillance workfield, because we want the spaces to belong to us, since we are the ones that manage them, to be spaces of contacts and not aisles for humans and comoditis, because we want knowledge to be created and transmitted freely and united with life and not consumed mutilated in alienated classrooms, for all the reasons of the world.

And no, we don't like the university as it has now, and we sure don't want it to stay the same. We are too for its changing and its transmation. But as for that, we recognise its subversion and revolutionary deviation inside a context of a total personal and social liberation. We perceive it as a small moment of this struggle.

We will be tearing them down