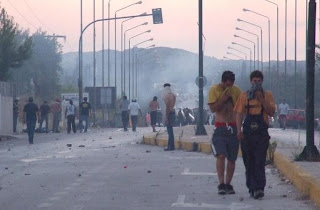 Massive clashes erupted outside the -under construction- illegal garbage disposal center at Lefkimmi, a village in southern Corfu, once the construction company (DOMOKAT) is now trespassing land they haven't yet expropriated and paid. Some hundreds of local residents gathered in order to reclaim the area from the police forces and block the works. The cops attacked them using excessive tear gas and rubber bullets, they even sent the police chief injured to the hospital, once he wasn't in his uniform and wasn't recognised! Another three cops were injured during the clashes. Three arrestees were tortured by the policemen and face charges.

The residents mobilization came from a popular assembly, one day before, that took place in Lefkimmi's high-school yard, also suggesting the following actions:
A whole island-wide demonstration on June 27 together with trade unions, environmental associations and others, lead by the struggle co-ordination committee.
A demonstration in Corfu city blockading the airport symbolically for two busy hours.
A sit-in at the entrance of the ring road to Missorachia and the promotion of the issue of a total management of solid wastes throughout the prefecture.

from a message posted on myspace.com

Last Saturday, 14/6/2008, the residents of the south Corfu town of Lefkimi have resumed their mobilisation against the building of an open garbage-dump (XYTA) meant to accomodate refuse from the tourist-rich north of the island. After lengthy direct-democratic discussions, the town's "People's Council" has decided to refuse the mediation of political parties and demand the immediate departure of the riot police forces (MAT) stationed in their area since the last street battles (29/5) which led to the death of a 42 year old mother, an event that has triggered solidarity protest marches across the country. "No dialogue can even start while our town is under occupation", claimed the residents identifying the riot police with the nazi forces of the 40s.

The situation escalated once again, when on Monday the 16th of July, faced with the government's refusal of their terms, the residents of Lefkimi errected once again barricades in an effort to inhibit construction of the new refuse unit. The renewed mobilisation of the residents was met with ruthless repression during which the riot-police used tear gas and, for the first time in recent greek history, plastic bullets. Four residents and 3 policemen have been wounded during the clashes, with the situation remaining tense and reinforcements sent by the mainland.