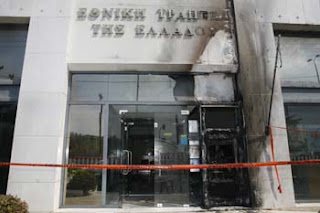 According to "Tahydromos" (http://www.taxydromos.gr/ArticleDetail.aspx?nodeSerial=001001&nodeId=2&articleId=12277#), "an explosion of an improvised device caused large damages to the subsidiary of Ethniki bank on Larissis and Neapoleos street corner, set there by unknown persons. The explosion happened at 4:04 in the morning and resulted in total wrecking of the bank's glass windows and destruction of the ATM placed there. According to evidence gathered the police of Volos Security departement believes the unknown persons set gas canisters and a piece of clothe bathed in oil inside a paperbox and then set it on fire. From the flames there was over-heating causing the canisters to explode and breaking the glass windows and covering the ATM with flames"...'it was the forth of such attack against bank ATM's during the last 5 years" (regarding Volos).

Here is a translation of the claim, sent via e-mail:

Last night we set an incendiary device at the Ethniki bank of Agii Anargiri at Volos. We selected to attack in suck a way to cause material damages and even a minimum disorder to the normal flaw of money.

Banks will be an essential target as economic mechanisms of exploitation and also modern temples of the system that produce and recycle obedient consumers. It takes only one look upon the fake smiles of their stupid commercials, compared with the miserable reality of loans combined with the forced 8hours of work to spot the top of misery they call social peace.

It's right there where we target: to undermine it and to destroy it. That's why the time and place of the attacks isn't limited, their realisation doesn't wait for occasions. We aim to generalise and spread such offensive actions..

This action is dedicated to all imprisoned anarchists...