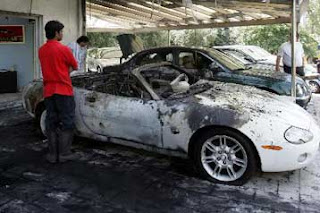 "The unknown arsonists acting coordinated set the ga canister incendiary dev
ices in a period of only 7 minutes, from 2:32 to 2.39 in the morning at these points: On Ifikratous street in Pagrati, against a diplomatic vehicle of Czech Republic, on Ialemou and Samis in Patisia against a diplomatic vehicle of Italy, on Makrigianni street 26 in Agios Dimitrios against a car, on Viotias 6 in Halandri, in the entrance of Ethniki Asfalistiki (insurance company), and on Idomeneos 49 street in Ilion against a Eurobank branch. The largest damages though were caused on Protopapadaki street in Galatsi, where 4 cars were wrecked and many damages caused against the Citroen car agency. It is noted that Citroen was the only car agency on Protopapadaki street that hadn't been tageted by arsonists in the past. Later on, in 5:15 in the dawn another 3 gas canister incendiary devices exploded on G. Papandreou street in Melissia, against a Marfin Bank branch, a City Bank and Interamerican insurance company entrance, where slight damages were caused. The state security leads the investigations.

For the economy to provide its maximum in capitalism, the condition of labor as its foundation stone demands everything from us. We shall leave the syndicalists and all other institutions to bargain the terms of slavery in the galleons of labor and the price of human life, counted in money. As for us, we select once more to fight for our "rights" with fire.
We come in total rupture with the values and the structure of this society and continue to undertake the destructive work of creating insecurities in your secure world.

Our sight is hostile and our intentions aggresive against the bosses as well as those that passively accepted their roles as servants. Besides, an authoritarian relation requires a ruler no more than one ruled.

We don't comfort with manichean visions... We set ourselves practically on the side of those that decided to take their fate into their own hands and select their lives.
Those that without second though dug out the axe of war and with rage grapped everything that belongs to them. Those that decided to get out of the waiting lounge of their lives and dared to act. We are on the side of everyone that selects to escape from the barracks of the existential poverty and mere survival.

Insurrection finds a base only in the individual selection and consciousness, in the determination to no longer wait for anyone and for anything, to attack here and now everything that represses us. There is no other way besides the revolution, the violent rupture, to destroy the universal chains of exploitation and repression. And only through the hurricanes of this revolutionary war, will we seek for our accomplishes to come out of the shaddows of apathy, the revolutionaries that raise from the mases of exploitation and repression.
And again, there is nothing better than revolution, to assure that the wheels of the exploitation machinery and of social control keep rolling only because of the wilfull service of the exploited ones.
We leave the dichotomy among "political" and "common crime" cases to the courthouse speeches and the "intellectuals"' cycles. The road to freedom is inseperate, but the path heading there are many.
The coordinated attacks against nine targets in Athens and a tax office in Thessaloniki was realised as one more sign of Solidarity to the comrade Polykarpos Georgiadis and to Vaggelis Hrisohoidis, Vassilis Paleokostas and Giorgos Haralambidis, accused for the case of the industrialist Mylonas' kidnapping in June.

Finally, we dedicate this yesterday's attack to the prisoner in struggle Vaggelis Pallis, as a minimum response of our offensive mood against the generalised world of prisons.

PS. Either on a strike, or even with a rain, we still got reserves of gasoline and rage.

Conspiracy of Cells of Fire Athens-Thessaloniki

This communique again was sent to the e-mail, related to certain attacks against stript-tease company vehicles, during next day's noon:

We have attacked many times against more obvious mechanisms of authority and social control. Last night, banks, diplomatic cars, a security company vehicle, insurance companies, a car agency and a tax office were attacked with fire.. Today we selected to strike in the middle of the noon on Syggrou Avenue vans that belong to stript-tease clubs, a relation of exploitation that often stays in the shadow: The "stripped-down" trading of human flesh, sex reduces to merchandise. Women trafficking, slavery for a fake form of entertainment. Today we attacked against the sex industry and its pimps. We attacked the misery that it causes and the misery from wich it is reproduced by various social parts. Decent householders, succesful carreer-men, showing their true intentions the nights. In a world that destroys our every pleasure, the only real pleasure lies in the destruction of this old world.

Note: for previous actions of the "Conspiracy of Cells of Fire" click here.