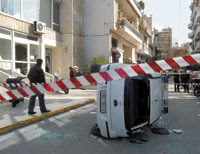 According to an anonymous phonecall, the attack against the building of the municipal police on Imittou 251, Pagrati district, Athens, was a sign of solidarity to Marios Tsourapas and Chrissostomos Kontorevithakis. Unidentified persons attacked with sticks and stones and other objecs the buildings glass windows, as well as a municipal police vehicle. In their way out, they turned upside down a patrol car of the municipal police, throwing leaflets writing on them: "If the innocent do worth our solidarity, the guilty deserve it even more" and demanding for the liberation of Marios Tsourapas and Chrissostomos Kontorevithakis, under pre-trial imprisonment, accused of an arson attempt against a municipal police patrol car, on 5/6/2007, in Paleo Faliro, Athens.