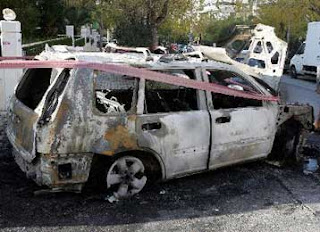 "The private car of the honorary consul of Chile in Athens was firebombed, during Sunday's early morning. It was parked at Diogenous Street, in Halandri district. Unidentified persons put an improvised explosive devise with gas canisters under the car, wich caused a total damage. A bit later, another unknown person phone-called "Eleftherotipia" newspaper claiming the action for the "Combatant Solidarity" (Mahitiki Allileggyi), in favor of the struggle of the natives of Chile.

According to "Eleftherotipia" newspaper, where there was realised a claim of responsibility the arson was "in solidarity to the natives of Chile fighting for land, dignity and freedom against the interests of the corporations and the repression of the chilean state. With this action we join our voice with the rest voices in solidarity to the native political prisoner Patricia Troncoso, who is on her 10th day of hunger strike, fighting for her freedom"