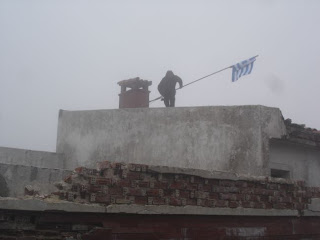 Unknown persons stole the greek state's flag from the resort built by the former colonnel G. Papadopoulos, head of the military junta (1967-74), and also spray painted slogans on the building, undersigning as 714 Proletarian Brigade. The flag was later on replaced by a group in military-styled clothes, but was once again removed right after that!