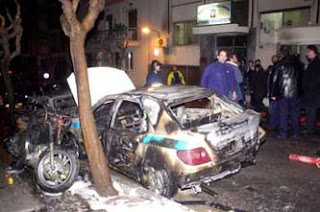 An unknown number of persons attacked suddenly with molotov cocktails the police station of Pefki, Athens. They destroyed at least 4 police patrol cars, 2 undercover police cars and one motorbike, all of them parked in front of the police station.

According to the media reports, the few policemen that were present at the time, were caught by surprise and run to the building's rooftop. Even the guard run inside the police station. Later on, more than 20 persons from the nearby area had their ID's checked by policemen. The "anti-terrorist" squad is leading the investigations.

The same evening there was also another attack against a Riot police squad at Harilaou Trikoupi Street (outside PASOK's political offices) in Exarcheia district, Athens.

For the attack at Pefki, there was a communique sent to "Eleftherotipia" newspaper. According to the newspaper, the "Circles of disordering Social Peace" ("Kikli Diasalefsis tis Koinonikis Irinis") claim respnsibility for the attack. In their text they explain why such an attack is not uncalled-for, and that they do not forget about the tortures and rapes, the "unexplained deaths" and woman trafficking taking place inside the police stations, the camouflaged action of supposed to be "angry" loyalists, fascists and state-agents as in the events in Rentis and Egaleo, the constant pressure and threatening against comrades as in Heraklion, Crete, where a comrade was kidnapped by masked policemen, the beating of protesters by the riot polcice, and of the prison rebels last April around the whole country prisons,the kidnaps and the every-day "accidental gun-firing" and express their solidarity to the imprisoned anarchists and their fugitive comrades.

For these they claim to have attacked the Police Station of Pefki, destroying all the police cars there were outside the building. "As far as the glass-window of the intensified police-state is concerned, it gets broken in front of the determination and the rage of rebellious humans. The only relation among revolutionaries and cops, as well as a society of loyalist citizens-snitches is one, this of a hated enemy". They also send revolutionary greetings to the anarchists: G. Dimitrakis, G. Voutsis-Vogiatzis, Chr. Kontorevithakis, M. Tsourapas, V. Botzatzis, N. Kountardas, to the three fugitives for the "Ethniki" bank case, and the three fugitives for the arson against a french car agency. "Freedom for all, struggle for the social subversion". They end up mentioning they knew the guard most times is inside his box-watch, so they were properly prepared. "The truth is we felt a little disappointed once we saw him hiding himself in one of the ground floor's offices".