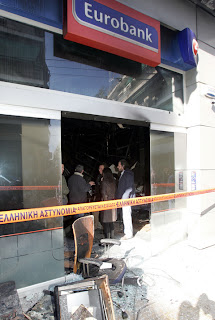 According to reports (in greek) at athens.indymedia.org unknown persons attacked with molotov cocktails a subsidiary of eurobank in Petralona district (Athens). According to ANA-MPA news agency, the arson caused sever damages to the bank. A group claimed responsibility by an anonymoys e-mail to directactiongr@yahoo.gr stating:

The "Cells of Incendiary Solidarity" (Pirines Empristikis Allileggyis) claim responsibility for the arson at Eurobank on Trion Ierarhon Street in Petralona, on Saturday January 19, in solidarity to the emprisoned anarchist Vaggelis Botzatzis, accused with 3 arson attacks against governmental-economic targets and to the three companions that are fugitive under the same case.

The institutions of state-run enterprises, car agencies and banks, have been and will be today's targets, targets that every revolutionary chooses to attack. These attack are born from a total perception and a route of actions against the capitalist-economic domination. These words here do not mean to recognise their-selves in a "typical claim of responsibility" because their meaning is found in the transmission of the revolutionary flame. WE ARE ON WAR. The persecutions cannot stop the incendiary actions and the rebellious consciences. Honour to those that in their lives, they set their own time and place, their "how" and "why"...

The ashes of the burnt banks for the fugitive companions and the emprisoned anarchist Vaggelis Botzatzis.

Note: Vaggelis Botzatzis is an anarchist from Thessaloniki, in a pre-trial emprisonment in Komotini prisons, accused for arsons in a french brand car yard, a millenium bank subsidiary and Public Power Company vehicles. He is persecuted based on a security guard's accusations. Apart from him, another three anarchists are fugitive for the same case.

Solidarity from an English syndicalist. Keep up the good work in Greece!