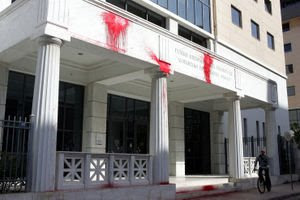 From a report in greek at http://athens.indymedia.org/front.php3?lang=el&article_id=858324

"On Louizis Riankour street, another group of youth threw stones and paints against the First Instance Court, that resulted to break several glass windows and cause damages on the facade. They managed to leave the area, without anyone getting arrested".

The following communique, appeared at athens.indymedia.org and via e-mail to directactiongr@yahoo.gr:

On April the 18nth, we attacked the First Instance Court at Panormos area, with sledge hammers, stones and paints, as a means of solidarity to the comrade Giorgos Voutsis-Vogiatzis, the continuation of his detaintion is under consideration these days for the case of the armed robbery at ETE National Bank at Gizi. We don't entertain illusions on the role of your justice. In the piles of juridical briefs are accumulated the penalties of imprisonment and refusing of freedom that feed the constant crime of the prisons existence.

Your decisions are totally Lined up to the bosses' laws, condemning people that break the law, commiting "crimes" that are produced within this society by the oppresive regime we live in. As for those that dare to seek for freedom within insurrectionary actions, the punishment of prison is the promise you accredit them with. So, you too shouldn't entertain any illusions that we will abandon our comrades. We continue being on their side, going along the same "criminal" route seeking for passages to escape and get free from your world. Freedom for our imprisoned comrades Giannis Dimitrakis, Vaggelis Botzatzis, Marios Tsourapas, Chrissostomos Kontorevithakis.

Solidarity to all the prisoners that don't bow their heads down. It all continues.

P.S. The responsibility claim projected by the regime's media from the "Anti-state Action" group is fake and false.