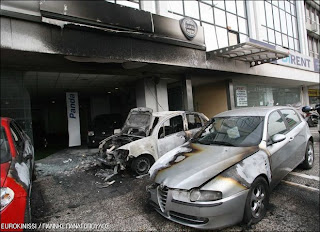 "Arson series against four car agencies and a car expo with mostly Italian brands, as well as at the Greco-Italian School, from around 12:50 to 1:15 the midnight, damaging or totally destroying 35 cars by improvised incendiary devices set by unknown persons"
"...A gas canister device blasted around 1:05 after midnight, at a clothes agency on Vas. Irakleiou 18, in the center of Thessaloniki..."

The "Conspiracy of Cells of Fire" claimed responsibility for the actions via e-mail to directactiongr@yahoo.gr. This is a translation of the communique:

On Wednesday April 9 we spotted and torched agencies of Italian interests (Car agencies, Greco-Iralian school bus). By this movement, we send to the imprisoned Italian comrades accused for membership in F.A.I. (Informal Anarchist Federation) our salutation with fire. This is how we re-activate vigorously the internationalist revolutionary solidarity.

The Italian comrades of F.A.I. form a federation that through its offensive actions, as the one of 21/12/2003 setting of explosive devices outside the house of -the president of E.U. at the time- Romano Prodi, or of the 3/3/2005, with their triple bomb attack outside carabinieri barracks, at Genova and Milano, claiming: "...We consider essential that every person that isn't tamed by the fake prosperity that democracy provides, must express his/her rage with his/her action and by every means, we will keep on intruding your dreams, your economic interests and your peace. It won't take you much time to understand the consequences of your indifference (abstract of a F.A.I. communique).

In this tough route they selected, there were also losses. Arrest warrants, imprisonments, juridical farces. The last years, the Italian state attacks brutally the insurrectional part among the Italian anarchists. Apart from perennial captivities, certain other comrades as Massari, Rosa, Fantazzini, are n't accompanying us anymore in this dangerous route to the wild rebellion, since they were murdered by the Italian state. But neither death is able to erase the rage from the eyes of the insurgents.

The cells of F.A.I. and not only them, strike back and attempt to create a condition of omnipresent conflict, where there is no place for compromise.

Accomplices in the crime of direct revolutionary action, we seek, through our attacks, to form a range of dislocation of the uneventful social peace. To commit the crime of ending the silence, to overcome the postponements and the hesitations, to live beyond the laws that enslave and the conventions that shoot in the back. And the only precise way to achieve this, is to participate in the revolutionary war, declared since the beginning.

This is our way to spread the fire of conscience, in this combatant condition that we selected for ourselves.

We don't abandon any imprisoned comrade, neither in Greece, nor in Italy, nor anywhere.

Revolutionary salutations to the imprisoned Italian comrades, accused for membership in F.A.I.

Freedom for all imprisoned Italian comrades accused for subversive practices.

It all continues, we'll be back soon.

Conspiracy of Cells of Fire


Note: Previous actions of the Conspiracy of Cells of Fire:

Update 12/4: The following note appeared in the guestbook:

"Within the context of actions of offensive solidarity to the Italian comrades of FAI, we also attacked (same day and same hour with the comrades in Athens) 2 targets of Italian interest: An Italian brand commercial store in the center of Thessaloniki and a Benetton subsidiary in Kalamaria."

Solidarity to the prosecuted for the FAI.

a few readings on FAI:

A translation of the communique in Italian is available from: