Some of the actions in solidarity to Evaggelismos Squat at Heraklion, Crete, threatened with eviction by the university authorities (that own the long time abandoned building), found at the squat's blog. Check out also here. 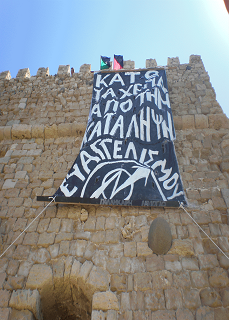 Around 250 persons gathered from the morning to demonstrate in solidarity to Evaggelismos squat from the center of Heraklion to the squatted building. Communiques were read and distributed, slogans chanted and spray painted on walls as well as stencils, bank CCTV cameras were broken and sabotaged and many texts and flyers distributed to people.

Many texts were distributed and read at Theotokopoulou park, were many people attended this event organised by the squatters.

Tuesday 5/8 : Occupation of the venetian fort of Koule

During the early hours the venetian fort of Koule at Heraklion harbour, where they lifted a banner writting "HANDS OFF EVAGGELISMOS SQUAT" above the fort's entrance, and distributed texts on the recent events.

Monday 4/8 : Occupation of a radio station at Heraklion

During the early hours, Yperihos 92,1 FM radio station at Heraklion was occupied, in order to inform on Evaggelismos Squat. Texts of the squatters were read concerning the last events as well as texts on squats and self-managed spaces.

Outside the municipal garden-theater of Heraklion, two banners were hung and the text of Evaggelismos squatters was distributed, while later, comrades invaded the scene disrupting the concert for a few minutes holding a banner "HANDS OFF EVAGGELISMOS SQUAT" and reading from the microphone their poster's text.

A gathering - microphonics intervention in the center of Heraklion, where many squatters' texts were read and distributed, around 70-80 persons gathered so it was decided to turn to a solidarity march towards Evaggelismos Squat. During the march posters of the squat were glued on walls, slogans spray-painted, texts and flyers distributed. The march ended at Evaggelismos building.

Friday 1/8 : National day of counter-information and action in solidarity to Evaggelismos Squat

During the morning, the dean's halls of the universities of Heraklion, Athens, Volos, Ioannina were occupied in solidarity to Evaggelismos Squat, threatened with eviction.

Same afternoon at Liontaria square (city center) texts were read at the mic and distributed to people passing by.

During the early hours 2 radio stations (Alpha radio and Kiss FM) were occupied, in order to inform on Evaggelismos Squat. Texts of the squat were read concerning the last events and squats and self-managed spaces in general.

Microphonics Intervention at the city center

The same afternoon texts were read at the mic and distributed. Many people participated.

Outside the garden-theater of Heraklion two banners were hung and the squat's text was distributed, while later on, comrades disrupted the concert for a few minutes, holding a banner and taking the mic to read the poster's text.

Notes:
1] Mobilizations continue
2] Squat's text in english can be found here A video of an intervention and another text in english are there. A spanish translation is here.