Clashes and repelling journalists at the courthouse (Thessaloniki, 28/8/2008) 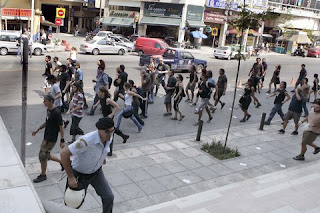 "Around 50 anarchists chanted slogans in favor of the notorious illegalist and their like-minded members of the gang and even clashed with the police outside the courthouse. "Politicians, industrialists and ship-owners, kidnaps and gallows come ahead", and "the passion for freedom is stronger than all prisons" are some of the slogans the youth from the antiauthoritarian milieu chanted, while waiting for the tranfer of the 27 (sic) year old Polykarpos Georgiadis and the 28 year old Vaggelis Hrisohoidis, who with the 40 year old Asimakis Lazaridis are concidered to be members of the hard core of Vassilis Palaiokostas band. As time passed and the transfer delayed, the youth started throwing bottles of water, coffees and plastic objects towards the police, and when the police bus arrived, together with strong back ups and EKAM special police units, the clashes moved to Politehniou and October 26th street corner. There, the anarchists clashed face to face with the police, while it is noted that the youth didn't have -as it is often- their faces covered with hoods and helmets. Their enraged reaction targeted also the TV channels groups that received bottles and stones".

In short, during the 2 comrades arrival, there were some clashes as the cops repelled the gathered people when trying to go near the comrades transfered from the buses inside the courthouse. Later on, bottles of water and coffees where thrown towards reporters and a camera of ET3 TV channel was destroyed.

From: http://anarcores.blogspot.com, Polykarpos and Vaggelis are in pre-trial emprisonment at Stavraki prisons (Ioannina) and Domokos prisons, accused for involvement in the kidnapping of the president of northern Greece's industrialists, G. Mylonas, owner of ALUMIL industries.

Here you can read some more information: http://www.inventati.org/anarhizam/index.php?option=com_content&task=view&id=3625&Itemid=1