From mass media reports and the blog http://xyta-lefkimis.blogspot.com/:

"Riots started when more than 150 persons gathered at the work site of the XYTA ("hygienic" disposal center). As the residents claim, they went there to dig water channels at their fields, that are tresspassed by the XYTA works, and the riot police repelled them with batons, bang-light grenades and tear gas. Residents state the policemen were beating and insulting women and children as well. The police claims they were attacked with molotovs, stones and metal screws. The pigs' scenario of the events:

"...On the opposite, during the conciliations, 35-40 persons detached from the main body of the gathering and moved around 20:30 offensively towards the police forces inside the XYTA work site. The police forces were attacked with various objects (stones metal screws hurled with slingshots), and used to repell the offensors bang-light grenades and limited use of chemical gases. A group different from the gathered persons around 21:00 spotted a Corfu police patrol car parked on Lefkimmi's ring road and after they attacked with stones against the driver, a border guard, forcing him to retreat, hurled molotov cocktails and totally destroyed the car. Next, around 22:40 a crowd around 150 persons, many of them having their faces covered with neckerchieves or wearing helmets, attacked the Lefkimmi police station hurling a large number of molotovs, stones, metal objects, and small bolts and metal bullets using slingshots. From these objects material damages were caused (windscreans broken) at 3 police cars, parked outside the police station. The molotovs burning endangered officers and property of the police station and discouraged the immediate reaction of the police guards, that managed to put off the fires with mobile fire extinguishers. This attack caused damages to the front and the glass windows of the police station, while in the area of the attacke were found pieces from broken bottles, 6 molotovs that didn't explode, gathered and will be used as evidence against the perpetrators, sent for investigation. From the offensors, untill now 2 locals where identified and arrested a priest that encouraged the crowd to attack the police station and burn it down, and another own with his face covered participating in the riot throwing stones against the police station. From the attack three police officers were slightly injured, and taken to the general hospital of Corfu for the first aids. From the gathered and offensors no one was injured since the police forces, under attack, kept an absolutely deffensive stance". (from the police announcement on the events) 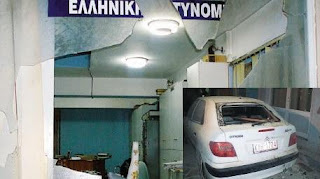 "The residents had noticed the police and the XYTA contractor, that they would open water channels at their fields, though the police prevented them from reaching there"
"The two arrestees (the priest Spyros Monastiriotis and a student Sp. Makantanis) will face a jury on Wednesday 11:30. Meanwhile, police investigations continue in order to spot other persons participating in the riots, where three policemen were injured"

For previous mobilizations of the residents check out here:
http://directactiongr.blogspot.com/2008/07/lefkimmi-residents-keep-on-sabotaging.html

There is also a video at athens.indymedia.org showing clearly the cops charging their guns towards the demonstrators from the police station. 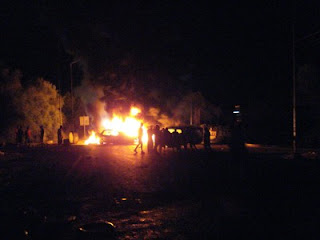