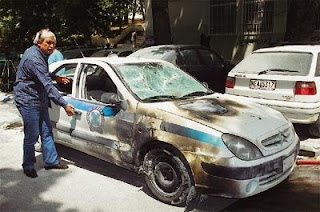 From media reports:
"According to evidence around 15 persons that came to the area on motorbikes, left their bikes in a close distance and approached the police station through a small park, initially hurled molotov cocktails against the guard who fired his gun in the air three times to panic them, though they continued throwing gas canisters and molotov cocktails against the parked police cars, destroying 5 patrol cars and two undercover police cars parked nearby..." An unknown man claim responsibility for a new organization called "Floga" (Flame). State security agency and antiterrorist unit have started investigations. 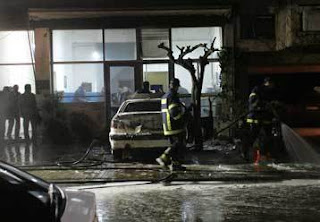 The following claim for "Symmories Syneidisis" (Gangs of Conscience) though, was sent to directactiongr@yahoo.gr together with other newspaper and tv-station mail accounts. Here is a translation from "libertarian" posted on athens imc.

Early in the morning of May 16 and without any special cause or pretext we attacked the Police Station of Aigaleo (Athens). There is though a precise reason why we did it and we will do it again, the reason is the existence of police themsleves. We won't wait for any abuse of authority to come to light, or for some cop to discharge his weapon “far exceeding his duty” , or for” breaking news” revelations of torturing in police stations, trafficking drugs, raping prostitutes etc. We break the silence and apathy of this society, and take the offensive ourselves. Since the police have only one precise role: They are the armed mercenaries of this democratic despotism that safeguard the order and security of the regime. Defenders of the bosses' interests, supervisosr of loyalty, guardians of the orderly circulation of money and commodities.

This is what makes the police an all-time charming target. So let the cops know, from the "tough" riot policemen to the sheriff styled motorbike cops, to every last patrol policeman that what they should respectively expect is no less than a well sized stone on their heads.

We don't discriminate among them, it is they who chose to discriminate themselves from the rest of society, by wearing this uniform. Well prepared ambushes and attacks are the price of their choice

We won't go into self-evident matters. Whoever doesn't get that cops are the protectors of this system of exploitation and repression is either an imbecile or a colleague of theirs.
We live in a uniformed reality that carries a gun and controls the modern sterile everyday life and all it comes to is a constant parade of obeying commands and orders, under the sounds of silence and passivity.

Willing to shock this mournful normality, we selected to organize an attack against a police station that symbolizes the protector of the above everyday situation. We selected to strike the “reinforced”* police station of Aigaleo for a couple of other reasons too : First, we wanted to achieve maximum material damage. We already knew that this police station had enough vehicles parked for us to set on fire and this was a fine challenge and a motivation for our action. Secondly,a few months ago in Aigaleo, a "residents committee" appeared, realising a march demanding further policing in the area. This attack against the police station of Aigaleo is our contribution to this dialogue that we intend to open with this particular piece of social snitching.
Finally, as far as the time of the action is concerned, we wanted to bring back another importand date, as a homage to the urban guerrilla Christos Tsoutsouvis who in May 15, 1985 was murdered in an armed clash with policemen in Gizi, only after he managed to execute three of them. This strike is dedicated to all those comrades that in these times of silence and passivity, wilfully insist to ablaze with light the quiet nights of the metropolis with their flames.

P.S. We left the police station according to our plan, the moment we had decided, and not because of the cops' gun fires, as the police's circles claim.

*By the term reinforced I tried to describe a special case of some Greek police stations that are the result of a merger of many smaller stations. The greek term is “multiforced”.