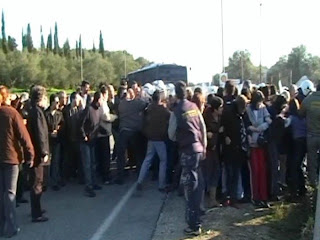 Major clashes erupted among local residents and riot police forces early in the morning at Lefkimmi, in southern Corfu, during the protests against the illegal construction of a garbage dump in the area. The residents built barricades to prevent construction works, and repelled the riot police with stones and fireworks.

The residents protest against the illegal and dangerous for the local area construction of a garbage dump. In their previous mobilizations they realised marches, an occupation of the local town hall of Lefkimmi, and they faced once again serious police violence on 11/1/2008. 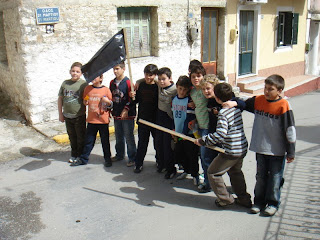 videos from the clashes:

On the 29th of May residents of Lefkimi in Corfu erected barricades to stop the construction of an open garbage-dump near their town. Clashes with riot-police have left one dead, one parasylsed. The area is under police occupation.

The residents of Lefkimi in the south of Corfu island in greece are opposed to the construction of an Open Garbage-Dump (XYTA) near their town. The residents claimed that their marginalised, underdeveloped area known for its left-wing tradition and defience was being used as a refuse for the tourist-industry produced garbage of the north. Underlining the class aspect of the government's decision on the location of the site within 1.5 km of the residential area, the residents denouced it as a "colonial policy".

On the morning of the 29th of May the residents desided to man a blockade using old cars, tree braches and even rowing boats, so as to inhibit the construction of the site. Barricades were erected and oil was spilled on the road leading to inhibit construction machines. The government's response was the deployment of 8-10 squads of the infamous riot-police forces (MAT), a move which infuriated the residents. In the battle that ensued when the MAT tried to break the blockade, the residents set fire on the barricades, and attacked the riot-police with sticks, projectiles and molotov cocktails.

The response of the riot-police was ruthless: 13 people were arrested including the elected representatives of the residents, while scores of protesters were seriously injured. On the 1st of June, one of them, 43 year old Maria mother of 2 children, died of her injuries. Maria was hit by a 16 year old boy who lost control of his motorbike when he was hit on the head while driving by a riot-police officer. The 16 year old boy has been left paralysed due to spinal fractures. The greek government has refused to acknowledge the responsibility of the police in the death of Maria pressing charges against the 16 year old driver instead. In response the residents of Lefkimi have occupied the local city hall and have called for demonastrations of solidarity across the country. The town of Lefkimi is still under occupation by provocative police forces.