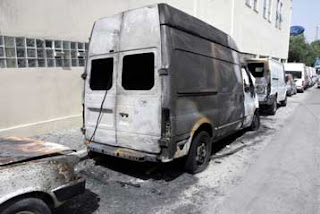 From the mass media coverage:

A slew of blasts shocked Friday's dawn six different spots of Athens, causing damages to banks, car dealerships and New Democracy (ruling party) local offices. The police estimates it was an organized plan, since all attacks were realized within 11 minutes, from 2:03 to 2:14. Incendiary devices were set against a Geniki Bank subsidiary, an Agrotiki Bank, a post office vehicle, 6 cars of a Ford car dealership, and a local office of New democracy. On 3:28 another arson was realized against a PPC (public power company), that damaged also a nearby car. Incendiary attacks happened also in Thessaloniki, against a Millennium bank subsidiary and a Eurobank, causing damages to their facades.

A translation of the claim sent to directactiongr@yahoo.gr:

Why we set your nights on fire

Every day that passes we see and hear of the same stuff. Costliness, poverty, unemployment, corruption, bribe, scandals. A world in pain, suffering but not dying. The politicians have their palms greased, the priests as well, the policemen too, though noone seems to take his life into serious account. The citizen's discontent runs out of steam in painless for the system protests and peaceful marches, petitions and new forms of cabled reaction that search for an identity surfing the web in innocent symbolisms.

But history is written when the silent crowd leaves and the silence's drop-outs advance. Where we quench our rage with fire and our fire with more gasoline. We are those that cannot fit in your shiny building's world, with its neon lights, the disgusting social conformity, fast cars, commercial centers, surveillance and control cameras, police forces of occupation in the metropolis. But, above all, we cannot fit in the blankness of this void life where even the thoughts, the emotions and the gestures follow the rules of this devious guidance and submission of our (or the market's) desires. This also explains why you want to suit us in the prisons you build to punish all those that defy your commands. We cannot fit there either...

And if some of our comrades got captive in the enemy's trap, keep in mind that wolves are always patient in their ambushes. We will be close to them with a clear breath waiting for our next meeting for the new attacks. In the dawn of Friday, May 30, we renewed our contracts with fire, that we will not leave more silent nights behind us and went on to 11 arson attacks in Athens and Thessaloniki (more precisely, against a Millenium bank and a Eurobank, as well as against foreign mission cars in Pilea).

We dedicate this action to the anarchists in pre-trial imprisonment Marios Tsourapas and Chrissostomos Kontorevithakis, accused for an arson attempt against a municipal police car, as well as to the also imprisoned anarchist Vaggelis Botzatzis, prosecuted for arsons against economic and governmental targets, all of them having their files considered these days whether to prolong their imprisonment.

We send our revolutionary greetings to the 3 fugitive comrades, accused for the same case, that selected the uncompromisable path of illegality, against retreating and surrender. Our fires shall cover their traces...

IT ALL CONTINUES-WE'LL BE BACK.