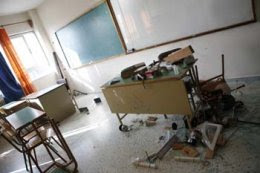 Massive vandalism and theft at the highschool of Almyros, Volos, and its laboratories. According to the newspaper, the school was occupied, though not after a general assembly of the students, but an initiative of some of them, that locked themselves in, early in the morning. School cannot function for the next days, because of the excessive damages. The unknown persons broke down glass windows, broke desks and broke in the cantine stealing food they handed out around many classes, and also damaged and stole stuff from the labs. Another 10 high-school ae occupied in Magnisia (Volos prefecture), while in others student don't come to the lessons.