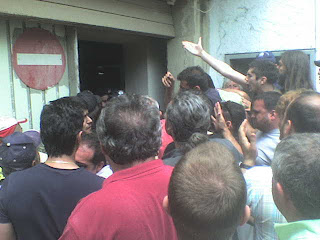 5:00 in the dawn and brigades of riot-policemen attacked the occupation of the ash and coal belt conveyors of the Agios Dimitrios power plant by residents of Riaki and Agios Dimitrios (Kozani), arresting 6 persons, members of the local Association on unemployment and for the environment. Next thing, technicians of the PPC (public power company) set in charge the auxiliary belt conveyor, putting away the possibility of a black-out and the political pressure it would bring. The police re-occupied the plant gate with riot police buses.

Same afternoon, residents of the area gathered outside the courthouse of Kozani, where the 6 arrestees were prosecuted, having their mobile phones taken away so as not to be able to communicate with a lawyer or a fellow fighter. The residents clashes face to face with the policemen outside the courthouse, but were repelled with excessive tear gas use.

The same time, 8 riot police brigades attacked against residents gathered near the factory, arresting 3 persons, the one of them they had previously injured and driven to the hospital. 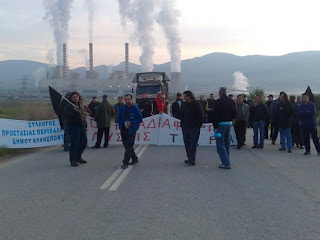 These last mobilizations of the residents have started 3 years ago, under their demand for employment of local residents in the PPC plants and the immediate taking of measures against the pollution caused by the plants. The area of Kozani has several power plants, because of its coal resources, producing the largest part of Greece's electric power, with the correlative effects on the residents health and life conditions and on the environment and its wildlife.

After 23 days of blockading the input and output convayor belts of one of the major power-plants of Greece by the Union against Unemployment, demanding re-employment, environmental reform and withdrawal of charges against rebel workers, riot police evicted the Agios Dimitrios Power-Plant occupation. Serious clashes have ensued in efforts to release the arrested Union members.

In the morning of the 10th of May 2008, the residents of Agios Dimitris,a town near the north-Greek city of Kozani, where the National Electric Company (DEH) holds its majors units, employing the vast majority of the working population, having formed a local Union against Unemployment occupied the north gate of the Agios Dimitrios Power-Plant, interrupting the function of the feed-belts carrying lignite, as well as the ash-belts from the factory to the disposal area. The blockade was manned in shifts by all the residents of the township, including children, in solidarity with the industrial action.The Union demanded the reemployment of sacked workers at DEH units in the region, measures for the protection of the environment, and an immediate withdrawal of charged pressed against 70 residents of the area for similar mobilisations last year.

In response, on the 18th day of the occupation, the National Electric Company pressed charges against the Union arguing its action is causing it enormous loses, for which it claimed one million euros compensation per day (the minimum salary in Greece is 650E per month). Aiming to put public pressure on the squatters, DEH claimed the occupation was threatening to put on hold all four units of the Agios Dimitrios Plant, one of the biggest in the country, thus putting the electric supply of the entire country in danger. In reality the industrial action was decreasing averall electric production capacity only by 500 megawatt. Nevertheless, in the following days the DEH monopoly waged a media campaign warning of the necessity of black outs in response of the crisis.

Some days later, the squatters refused to hold talks with the local authorities and the minister of development when they demanded the unblocking of the conveyor belts as a guarantee of the negotiations.

On Monday the 2nd of June 2008, 5 am, riot-police forces violently ended the 23 day long blockade of the Electric Power-Plant at Agios Dimitris. The police warned the squatters to clear the DEH premises, and when the latter refused, the riot-police attacked arresting 6 men: the president and four members of the Union. During the consequent protest march in the industrial city of Kozani three more people were arested during major clashes with the police, with one protestor seriously wounded. After the economic secretary of the Union warned the police to release the 6 arrested or "face a general uprising; we shall torch the power-plant with crude oil and explosives, and get rid of this nightmare for ever", the authorities agreed to release the arrested members of the Union who will stand trial next September.

The Union and the totality of Agios Dimitris residents pledge to continue their struggle.