Attack against the police station of dimokratias square (Thessaloniki, 13/9/2008) 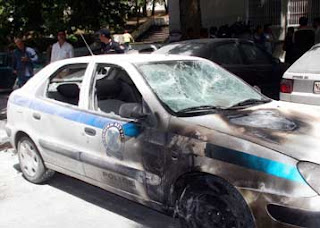 According to the mass-media:

"The organization "Cells of Fire", claimed responsibility for the incendiary attack with molotovs and gas canisters, early in the night of Saturday, against the police station of Dimokratias square, as a sign of solidarity, as they mentioned, to the arrestees of the case of Mylonas' kidnap. From the attack, excessive damages were caused to two police patrol cars, and two police motorcycles as well as 20 bikes. Also damages were caused to the guard's stand."

Here is a translation of a communique sent to directactiongr@yahoo.gr:

The days pass so indifferently. They seem like rings of an endless chain of burden and compromise. Work-home, home-work. We live constantly kept hostages. Hostages of the law, the employers, the lowered eyes and the submissive affirmatives. We don't want to be forgotten working a whole life for the bosses. We don't care for workers rights and unpaid over-work. We don't stand for better slavery conditions. We are determined to escape from work camps by any cost. Better live an hour as a wolf than a life as a sheep. Too often what we say resound like an echo in total void. But there are some rare moments of beauty and rebellion when some comrades together with disobedient wolves, send us back a rebellious signal.

Two months ago, an armed companionship kidnapped the president of northern Greece industrialists, G. Mylonas, demanding ransom to let him "free". The reasons were pretty apparent. Every day in our work our time is kidnapped, our mood, our creativity, our desire, our freedom too. Someones decided to strike back and become do-ers instead of victims. Thus, a gang of disobedients chose to "kidnap" a real kidnapper. The selection of the industrialist G. Mylonas couldn't be random. President of NGI, a millionaire with a modern profile and bad aesthetics.

This is why police and reporters started a manhunt to spot the preys that denied their roles. In the era of armed silence and the lawful manhunts, we will always be on the sides of those hunted. This is what the comrades P. Georgiadis and V. Hrisohoidis did, offering on a noble scale their solidarity to the hunted fugitive V. Paleokostas, accused by the authorities to be the "mastermind" behind Mylonas' kidnap. An action of solidarity that left a fadeless fiery mark on the ugliness of your world and your truth that kneels in front of "everyone mind his behalf". We are next to all the hunted because we have felt too the breaths of their prosecutors. We remember the noble effort of Sorin Matei to escape his prosecutors and his set-up death-trap, we took delight in the shooting skills of K. Passaris and the requiem of his prison guards, we shared laughts for the helicopter prison escape of V. Paleokostas and the humiliation of the police.

We remain next to them and invite them to improvise new rebellions together. There will always be a place for them among us.

On the decision we took to attack every law, order, silence and neutrality we chose last night to set afire the police station of dodekanisou street sending fraternal salutations to the comrade revolutionary P. Georgiadis and a signal of solidarity to his comrades and friends V. Hrisohoidis, V. Paleokostas and G. Haralambidis. Nothing has ended yet, and you know we are serious. You 'll soon hear more of us.

PS1 The adorable mr. Mylonas would better think again of his panegyric announcements on the police's success. It's simple thinking suggesting since we could hit his defenders, it couldn't be that hard to target him again.

PS2 We would also like to remind mr. Mylonas that he owes us 20 million euros more.


Note: for older actions and claims from the same group, click here.