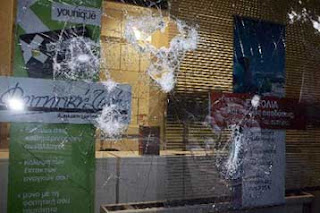 A listing of some of the offensive actions of groups of protestors during the marches at helexpo, a trade fair when the prime minister visits the town to give a speach and unions and political organizations are expected to demonstrate their discomfort to the government.

At the noon, workers of viamyl indistry blockaded the national road to the airport for half an hour. They will go on suck actions during the week.

On the marches now, at Venizelos' statue (Aristotelous square) GSEE and ADEDY (labor union confederations) gathered with all the fine gentlemen such as the patriot workers of olympic airways (waving a huge greek flag), cops union protestors and other PASOK -opposition party- friendly people). At the YMCA square were the gatherings of PAME (KKE-"communist" party workers' front) while at Kamara were the workers syndicates, environmental and workers groups, certain antiauthoritarians and leftists. In total, some thousands of people (more than 10.000 probably) marched at the streets of Thessaloniki, while the state deployed more than 2.500 cops, blockading many roads around the helexpo area.

Around 7:00 in the afternoon, most marches started. A little later, police forces were repelled from Egnatia street with bottles and stones. During the marches organized or not, groups of protestors:

Broke down glass windows of banks, religious stores and luxurious multistores (e.g. benetton, fokas, and some stores on Egnatia street in the city center). A TIM (relecommunications) store and an ATM of Emporiki bank caugh fire, on agias sofias street. Paints and spray-painting was made on churches and other outrageous enterprises.
Near YMCA square, there were some face to face clashes, among leftists-antiauthoritarians-others and the guard group of PAME (KKE), when the stalinists prevented the other demonstrators from reaching close to helexpo, using battons and bottles. Finally, PAME dominated and held the theatrical "push the fence" ("breaking the red-zone") itself, and then left, after making sure there were no other protestors close.
There was also an attack with bottles and stones against the block of cops protesting in uniform, behind the march of GSEE-ADEDY (union confederations), that caused minor clashes were 3-4 cops were injured. Thus, more cops (cops in plain clothes and riot cops) attacked the youth, and followed a chase with tear gas in the narrow streets above Kamara.
Near Tsimiski street, a riot police brigade attacked with tear gas and cops in plain clothes arrested 12 (as far as we can tell) persons), at Ippodromiou street corner. Another 3-4 persons were arrested during the marches, while at least 8 of them are prosecuted for "breaching/disrupting public peace". Finally, around the universities, where cops invaded earlier, erupted some minor clashes, when some people built barricades to prevent police attacks.

update: according to new info, 13 persons in total were arrested and face charges of a felony (disrupting public peace), and face a jury (police attorney) on Wednesday 10/9, 12:00. There is also a report that it was actually MERA (a leftwing party) that realised the "breaking of the red-zone" scene, and also welcomed some antiauthoritarians during the police attacks.