From the mass-media: "A group of unknown persons attacked with molotovs lat night at 23:50 a subsidiary of Piraeus bank, in the center of Thessaloniki. The group, five to seven persons, broke down the glass window of the bank on Vasileos Irakliou street, 1, and hurled two molotovs inside, causing material damages." 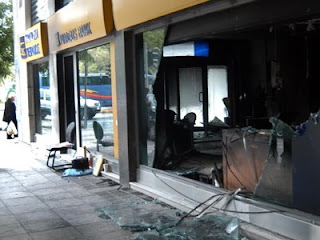 The night of Friday October 24, we set on fire the subsidiary of Piraeus bank on 1, Vasileos Irakliou street, wrecking it, as a minimum contribution to the proclaimed war against authority. A war that breaks out everyday, against state and capital and consciously unsettling the established order of social peace and harmony.
The bank, as a keystone of the economy will always be a target of ours.
We negate submission to the existant system of exploitation and thus we select to set the time and the place that our rage will be materialized.
Every lost hour in this society of torpor, apathy and wilful servitude is a defeat. Every assault is a victory.
We call the flames of negation of the existant to intensify the revolutionary action.
The capitalist society won't fall appart due to its economic contradictions and disruptions.
The revolutionaries-drop outs will care for its levelation.
We thus dedicate this attack to three of those.
To Dimitra Syrianou, Kostas Halazas and Ilias Nikolaou, accused with arsonist attacks realised in Thessaloniki and having gone underground, denying to give themselves in, to the hands of the judges.
Solidarity to all imprisoned revolutionaries.
'till the next time...