News come from the mass-media (a relative video here http://www.youtube.com/watch?v=r2ApjblisCM ) - a free translation from http://www.proininews.gr/?p=903 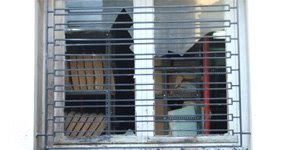 "An audacious arsonist attemp was made early Tuesday dawn against the courthouse of Kavala, near Kamares area. At 3:00 in the night, one or more unknown arsonists approached the building's ground floor from Omonias street, broke the glass window and threw in a molotov coctail. The bomb exploded at the penal cases archive causing a fire immediately. Passing by drivers, eventhough the traffick was minimum at the time, informed a police patrol who was realising breath tests at the time in a near-by point. This lucky coincidence helped so that the incident was put under control immediately. The policemen called the fire brigade that eventually pu out the fire, after breaking the door to enter the building. Police forces were around the point the whole night investigating without any outcome though. The damage caused was not great, but the incident gained much attention the next day at the courthouse, where the jury went on regularly. The police consider as responsibles a group of local anarchists, eventhough they have nothing to prove such an allegation. A few weeks earlier outside this same courthouse unknown persons, probably anarchists, had spray painted slogans on the wall, referring to their ideas and the liberation of persons kept as prisoners in the greek prisons."