From the mass-media: An arsonist rampage was realised within 10 minutes from 3:10 to 3:20 in the dawn. Unknown persons placed improvised incendiary devices of gas canisters at the subsidiaries of Emporiki bank at Paleo Faliro, Agrotiki bank at Patisia and Eurobank at Petralona. From the explosions and fires, material damages were caused to the banks. State security leads the investigations. 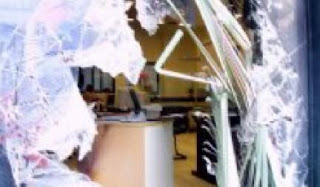 Translation of a communique published at http://athens.indymedia.org/front.php3?lang=el&article_id=917425

In the dawn of Friday 17:10 we selected to attack the Eurobank at Petralona, Emporiki bank at Palio Faliro and ATEBank at Kato Patisia, as well as a car agency on Thivon avenue in the dawn of Monday 20.10. as a few more hostilities against a world of "prison" every day more fulfilled and propagated.
Whoever hasn't been tamed by the fake wellbeing of democracy, expresses his rage striking against the symbols of domination and their expressions. In front of this spectacle of authority and death the only thing alive are our comrades and the solidarity that connects us together.
We send our voices to every attorney and judge that thinks he has power over the lives of our comrades, and our comradely embrace to vaggelis botzatzis, who can now march free in the pathways of his negations.
But the struggle doesn't end here.
We stand by dimitra syrianou, kostas halazas and ilias nikolaou who select the way of escape and we dedicate to them the ashes we leave behind us.