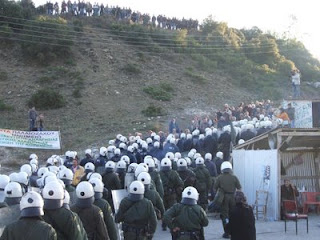 Confrontations with riot-police forces erupted when residents of Elliniko village, a few dozens solidarians from Giannena and also immigrants working in the village, blockaded the area where an open-disposal dump (XYTA) is planned, something that is quit opposite to the residents will, who are suggesting an other site less dangerous for the village. From Wednesday morning, 19 brigades of riot-cops, camped in the area with police buses, whle around 11:00 they attacked against the gathered residents with tear gas and batton sticks. The residents didn't compromise but fought back, setting up improvised barricades and throwing stones and bottles, making it a hostile ground for the police, that costed them 6 cop-pigs injured and sent to the hospital! During the night locals and solidarians remained restless keeping the village safe from attacks, while mobilizations seem to be on their way, both from the residents assembly running at the village, as well as by solidarians in Ioannina. 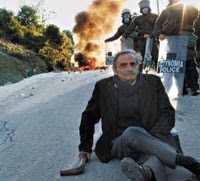 Also a report in english can be found at: http://libcom.org/news/barricades-clashes-elliniko-village-ne-greece-between-riot-police-locals-opposing-construct