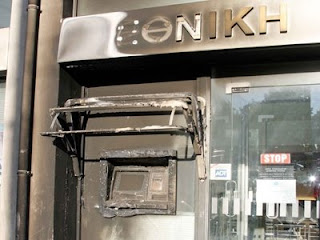 The photo comes from the mass-media, while the text was sent via e-mail. For previous actions of the "Conspiracy of Cells of Fire", click here.

During the dawn of Tuesday 7/10, we casted fire upon two ATMs and the facades of Ethniki bank branches inside the fortified with police patrols and control points, centre of Thessaloniki.
A year and three days after the armed robbery at an Ethniki branch at Gizi, and the arrest of the revolutionary and bank robber Giorgos Voutsis-Vogiatzis.
A year and tree days after the perfect cooperation between the police and civilians that strived to prove the tragic condition that is characteristic of our era.
The communion of interests and desires among exploiters and exploited: Security, social peace, obedience to the law...
But every condition gives birth to its Negation. And the conscious attacks against every relation, symbol, value, face representing capitalist society, a society of bosses and slaves, come as an exception to prov the rule of mediocricy and willful slavery.
Not to condemn themselves in the level the spectacle orders - as something vain or of non-sense, or even something that belongs to a gang of speialists, but as a component of the Negative that expands to do its part to bring forward the collapse of this world. And the basic function of this world, its engine is the dipole of working and consuming.
By robbing a bank, gaining back your time from the frustrating timetables, setting everyday life free of temporal and economic blackmails, you re-appropriate in essence, your own life.
In spite of all these, a battle doesn't win a war, a robbery doesn't bring down economy and an arson doesn't magically erase all the banks of the world, and quit similarly a comrade's arest doesn't end the revolutionary struggle...
For these reasons and another few more, we send incendiary salutations to Giorgos not only as a bank robber for his personal selection to negate working, but even more as a revolutionary for the whole of his activity.
As a drop-out selecting to fight the Existant in its totality...

CONSPIRACY OF CELLS OF FIRE THESSALONIKI

KNIGHTS OF THE FLAMING BANK / ABETTORS IN CRIME RAGING EGOS