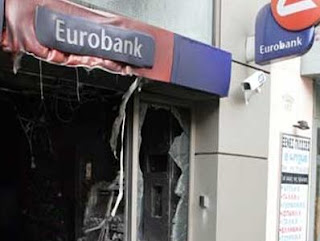 From the mass-media (zougla.gr):
"Arsonist rampage a few moments after 3 in the dawn, in Athens. Within 10 minutes arsonists hit 3 different targets. They attacked banks at Petralona, Paleo Faliro and Kato Patisia. The unknown persons placed incendiary device made of home gas canisters on the ATM of Eurobank on Trion Ierarhon street, Petralona. A similar device was set on Ahilleos and Venizelou at P. Faliro, causing damages also to the bank's entrance hall. Finally, unknown persons threw torched using flammable liquid the ATM of Agrotiki bank at Hrisostomou Smirnis 90-96, K. Patisia. The police leads the investigations.