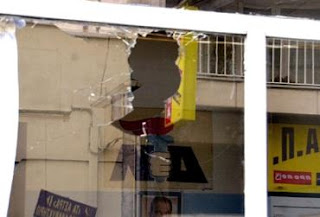 An attack with stones and other objects was realized in the dawn by a broup of unknown persons against the political offices of New Democracy (ruling party) and Syriza (left social-democrats) at Petralona.

The perpetrators broke glass windows and caused damages outside the offices of the two parties on Trion Ierarhon 93 and Athineou 18 and then disappeared.

Major damages were also caused to the subsidiary of Attiki Bank on Mavromihali 8, set on fire by youth yesterday at 9 in the night. They broke with a sledge-hammer the glass window of the ank and threw inside molotov bombs and gas canisters resulting to a large fire that expanded to the first floor as well.

Inside the bank at the time were the guard and the legal advisor of the bank, that went on the roof to save themselves, and went down only after the fire brigade came with a vehicle with ladder.

The same group, according to the police, right after the bank, attacked a fast food "Everest" subsidiary, on Solonos and Akadimias street corner, where they caused damages with stones and molotovs.

Also the government representative Evaggelos Antonaros was attacked while having dinner with his wife and daughter in a tavern at Exarchia. A group of youth throw him yoghurts, while some of them were recording the scene with their mobile phones.