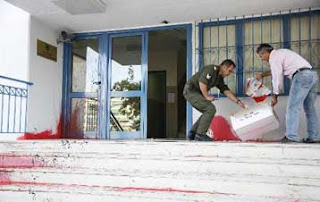 According to the mass-media "A group of 20 hooded persons attacked a while after 9:15 in the morning of Monday (13/10) the building holding the headquarters of hayward police and that used to be the internal affairs office, on 83, Syggrou avenue. The perpetrators approached on foot, without being noticed by the guard, and threw molotov cocktails, paints and stones, causing damages to the buildings entrance, and parked cars. Police forces sieged the area and realised investigations, but didn't make any arrests. This attack caused a big noise, since it was realised in the morning in one of the capital's most central places". 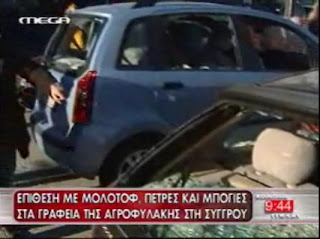 "The alienated character of labour is apparent definetly in the fact that when there is no natural or other constraint, labour is avoided as a social nuisance. The alienated labour where human alienates himself, is the labour of self-sacrifice, of devitalization".


On 21 of August, P. Georgiadis, V. Paleokostas and another comrade are arrested, while the prisoner G. Haralambidis is also accused for the kidnapping of the big industrialist G. Mylonas.

In an opressive system where compromise, apathy and servitude reign, snitching becomes a virtue and rebellion a crime. The bosses are the only kidnappers of our wasted work-hours, with the state being their accomplish in crime, and accessories all those legalizing this system with their stance and by aiding the police. A new witch-hunt is started against those fighting against them. Being taken as captives in society's prison cells, our comrades selected where and why to attack, selected to pay with the same currency...

And as for us, we selected to attack the internal affairs office on Syggrou setting the seal on our choise to stand on the opposite side, negating every other path and selecting the only way of negation and active solidarity. We do not oppose only to the state and the one or other action of its, nor only the bigger of all slavers, we also oppose to every kind of silence.

Our offensive solidarity will be keep them company while they are kept HOSTAGES of the state.

SOLIDARITY TO THE COMRADES

Our comradely regards to Giannis Dimitrakis that was today facing another jury on his choise to negate the army.
.