From the mass-media: A new attack of hooded persons within24 hours, this time against an office building of the environment ministry, on Panagi Tsaldari street, 15. Ten hooded persons, with their faces covered attacked with sticks and globs, causing damages to the building's facade and to four parked vehicles. Note that the previous day a group of hooded persons attacked the offices of the hayward police headquarters on Syggrou avenue. 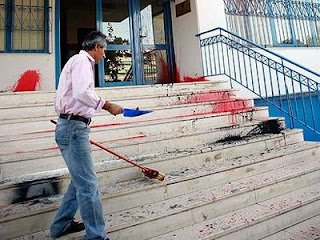 A translation of the a text sent via e-mail:

As a sign of solidarity to the struggle of Lefkimmi residents in Corfu against the construction of a "hygienic" dump, 40 anarchists and antiauthoritarians attacked the offices of Environment Ministry on Hamosternas street, on Tuesday October 14, at12:30. We broke down the main entrance and the ground floor of the building as well as another five government vehicles parked outsidethe building. We also threw red paints on the entrance as well as flyers.

Against a world of polluted rivers, burnt down forests, garbage dumps, against the world of capitalist development.
The murdered one, the dozens of arrests and the police occupation of Lefkimmi will not remain without a respond.
The Lefkimmians are not alone.