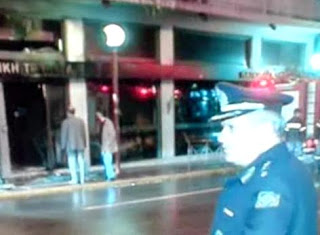 From the mass-media (espresso): An attack against the private car of a tv-persona (E. Menegaki) was the first of many others to follow the same night in diverse districts around Athens, as the local organization office of New Democracy or N.D. (ruling party) at Iraklio, Alpha bank at Neo Psyhiko, New Democracy offices at Moschato, two other vehicles at Ilioupoli ("Naftemporiki" newspaper states clear they were security company vehicles), Ethniki (National) bank at Dafni, and City Bank at Goudi. The police prosecuted more than 50 persons, but let them free afterwards since no evidence wa found against them. 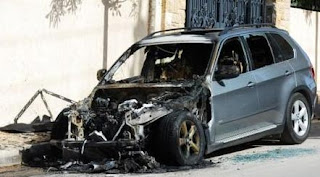 On 29/11/07 and a few hours after an arson at a car agency in Thessaloniki, the anarchist Vaggelis Botzatzis is arrested. A few days later the cops "find out" about Vaggelis' accomplishes and announce their success to the media which they tip with photos and identification of another 3 comrades.
On 9/10/08 Vaggelis is set free while the other 3 comrades are still underground actively defending their selection to be fugitives. Some may say that in our times it isn't worthy to strive in a futile fight and that it's dangerous and self-destructive to risk everything on it. But some others maybe won't. Maybe they will first question themselves upon the futility of our times and the self-destruction that lies within our institutionalized freedom. Those that wilfully kept fighting against their own times set historically their responsibility to overcome dilemmas. For us to be able to question ourselves, and also the next ones in their turn. And to act. Dimitra, Ilias, Kostas with their selection to escape set on their own some of the questions of our era. When it all seems to collapse, when fear and obedience built prisons to make sure we are free. Dominion calls upon legality as the most rational organization of a free society. And this is where it is all reversed. Prisons, terror-laws, killer cops, poverty, wage slavery, pillage of the banks, are evidence pointing out that legality is the biggest crime against our lives. And our live is transformed into a life sentence.
There will always be someones to escape and as "terrorists" or "criminals" take back their lives into their hands. And all prosecutions against them will always be a possibility. But these prosecutions, to all those consciously passing into offensive, won't be a self-sacrificial nor an heroic stance. It is the price that may come with the selection to be combative in our times. For ous, the only "wanted" are all those enemies to our lives. And thus we attacked:

SOLIDARITY TO THE 3 FUGITIVES OF THESSALONIKI

PS. Our revolutionary salutations to the prisoners struggle starting from Monday 3rd of November.