In the center of occupied by 9.000 cops Athens, there was an attack with red-paints at the ministry of press, while clashes with the riot-police erupted in front of the american embassy. Photos below from the clashes, the second one from a fortified molotov cocktail hurled to the police lines. (Photos from: http://athens.indymedia.org/front.php3?lang=el&article_id=926158)

In Volos, around 50 persons gathered at the bloc of Matsaggou squat attacked 4 bank subsidiaries, breaking the surveillance camera outside Eurobank and throwing eggs to ATMs. Then, they hit with sticks with flags, other banks' cameras and glass-windows. (Source: local paper "Thessalia": http://athens.indymedia.org/front.php3?lang=el&article_id=926831)
In Larissa, bank cameras were broken and paints thrown to banks, ATMs and an army officers club. (Photos: http://athens.indymedia.org/front.php3?lang=el&article_id=925984) 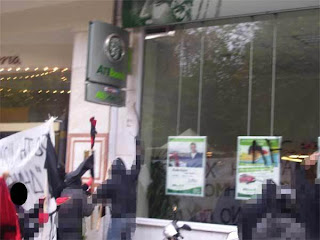 (Photo: demonstrators tear down an ATE bank's camera with their flags)

In Ioannina, paints were thrown against banks, while one bank had its facade broken down by the end of the march.

In Heraklion, Crete, paints were thrown to banks, policemen and state buildings, while a riot-police chief and another "working man in uniform" were injured by a bang-light grenade that exploded in their hands, while they were trying to throw it to the demonstrators just a few steps of them...