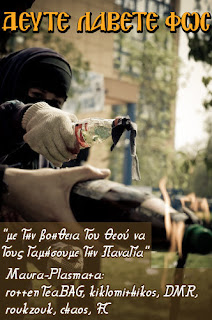 The site of the greek orthodox Patriarchate of Alexandria and Africa, was hacked by r0ukz0uk, and photos and the text in greek, denouncing the church's pillaging of public land doing their real estate business, the huge profits they make from the state and individuals, and the exploitation of human questions and suffering ending with "Let's burry the ties between society and the holly mafia", can be found at: http://athens.indymedia.org/front.php3?lang=el&article_id=920413.

Also, photos and greek text of the hacking of the site of Vatopedi monastery (very active in real estate) by "mavra plasmata (black creatures)" can be found at http://athens.indymedia.org/front.php3?lang=el&article_id=920428. The text, against religions dividing people, and church's exploitation end with" Against priests, churches, monasteries and patriarchates, lets re-appropriate not only the jewellery and the wealth but every inch of earth controlled and exploited by the priest-guards. PILLAGE THE CHURCHES