"After puting off the fire, firemen found gas canisters inside the store, a fact leading invstigations to an arson case, and police takes over..." 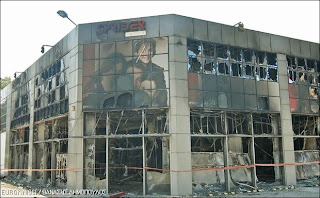 Communique sent via e-mail to directactiongr@yahoo.gr:

On June 28, 2008 we chose to strike one of the well-known Sprider chain stores, at Lykovrissi. This choise wasn't random at all.

We live an every day life turned into an arena of competition as well as accumulation and demonstration of lifeless objects. The expensive car, the classy outfit, the new mobile phone and fast internet are the modern values of your world. The consumer crowds grumbles over costliness while they buy off at their shopping therapy a piece of "joy" and a sterile image of success and show-off. In our days, humans seek for an identity at the new accessories of their mobile phones, their cars' covers and fashion trends. And everything seems cool.

It is enough for one to choose, of Saturday night's dilemma between Kolonaki or Psyrri area, the right dress, the appropriate mobile phone and most of all that fake smile, to impress everybody around.

When it comes to everyday life, the lack of communication, loneliness, the slow suicide of alienation, the servitude to a job, the cops' orders, the reporter's truth, the bosses' exploitation... Who cares about all that? Besides, they're not even a life-style trend to be advertised and followed faithfully.

Thus, all of you faithful consumers, titled with misery and proprietors of the lie can keep dressing up your fancy nothingness tissued with all the shades of compromise and indifference. We instead have chosen for ourselves the colors of war: As long as our life suffocates in the tissue of commercial advertise, useless objects, stylish orders and all the symbols of a consumer paradise, our rage with consiousness will keep searching for break-outs.

We had written in our communique concerning our previous strike against the Aigaleo Police Station, that we do not need an incident or a concurrence to get to action. Now though, we come with an event. On July 11, 2008 the comrades Marios Tsourapas and Chrissostomos Kontorevithakis face a jury, for their arsonist attempt against a municipal police car, an action they have claimed responsibility for, and stand up to it.

All we have to say on that, is that the material damages and the total destruction of this luxurious store are illustrative of our wilfulness, in case of our comrades imprisonment continues.

Note: You can read the previous claim of the Gangs of Conscience (Symmories Synidisis) on their attack against Aigaleo Police Station here:
http://directactiongr.blogspot.com/2008/05/attack-against-police-station-plus.html